Brainleech Devourers on a Budget! 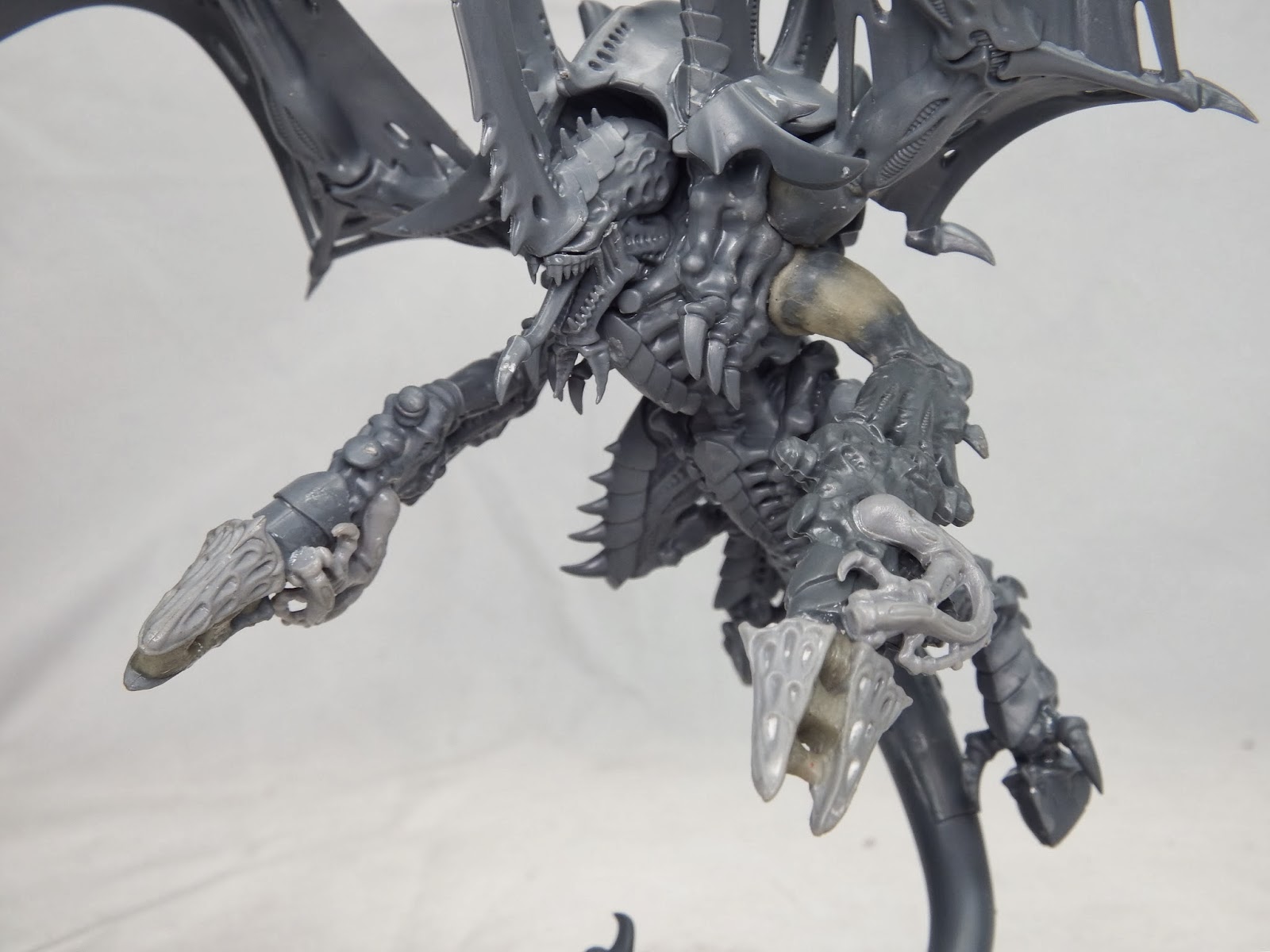 With Forgeworld recently releasing their own set of twin linked devourers, lots of folks were plenty excited!  Finally, easy access to a pair of devourers for your monstrous creatures!  I have to admit, they look pretty snazzy.  You know what I'm not crazy about?  The price.  13 GBP for 2 little arms, plus shipping?  Forget about it!  That's over $20 USD for just a few bits.  Does that seem like a good market value for these? 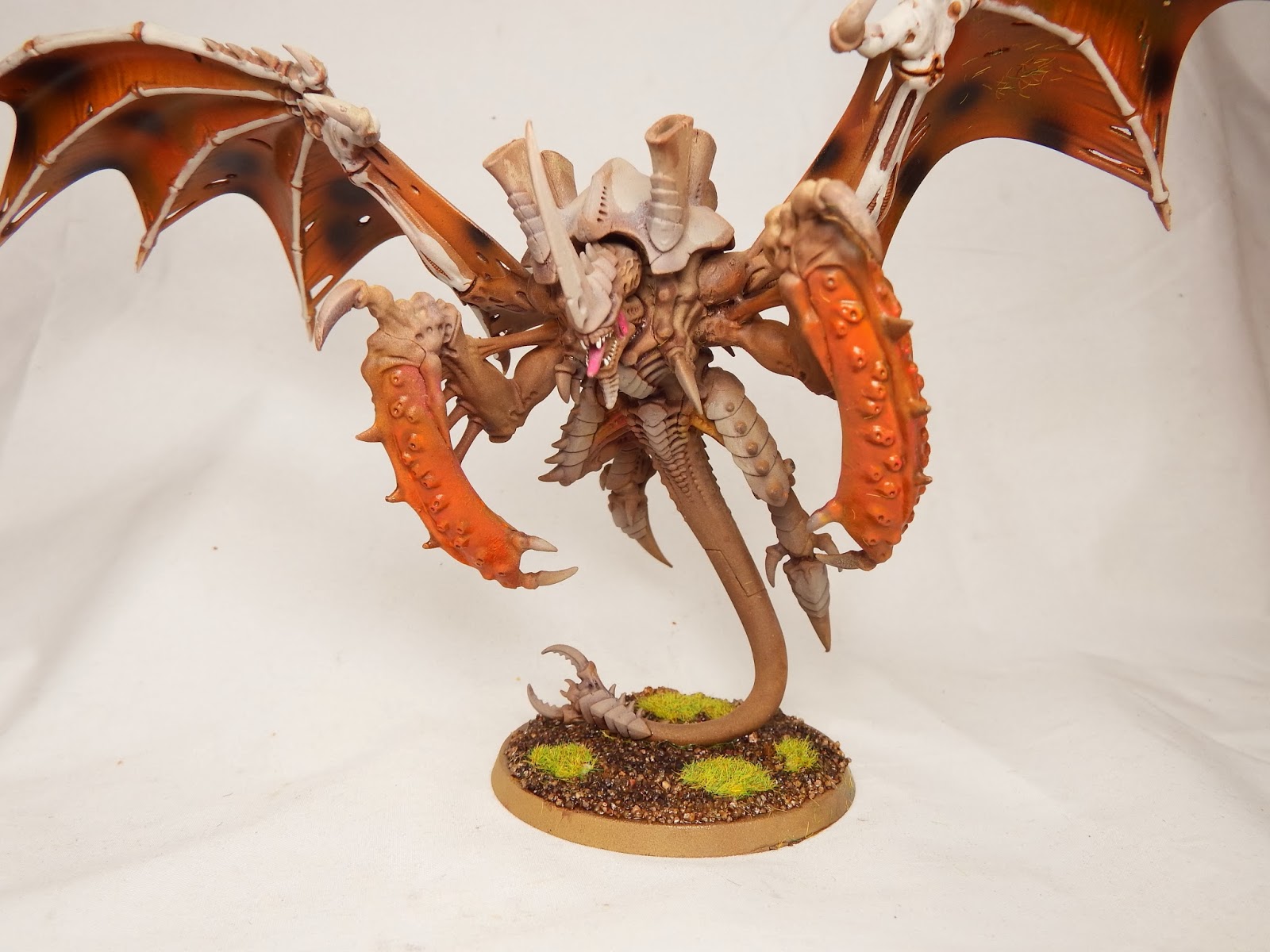 In the past, folks quickly learned that Fleshborer hives made a great alternatively to the far more popular Brainleech Devourers, especially considering the Flyrant only had one empty arm socket.  However, there are a few problems with this approach.  Firstly, Fleshborers hives can go for quite a bit on the second hand market, like ebay, when they are available at all.  A cursory search of Ebay for 'tyrannofex bits' yielded no results, other than just buying the entire kit!

Many of you will have been using the spare FBH's from our tervigon builds, but what about guys like me that like to use them for crazy conversions?  I need to save those fleshborer hives for other projects, like this guy! 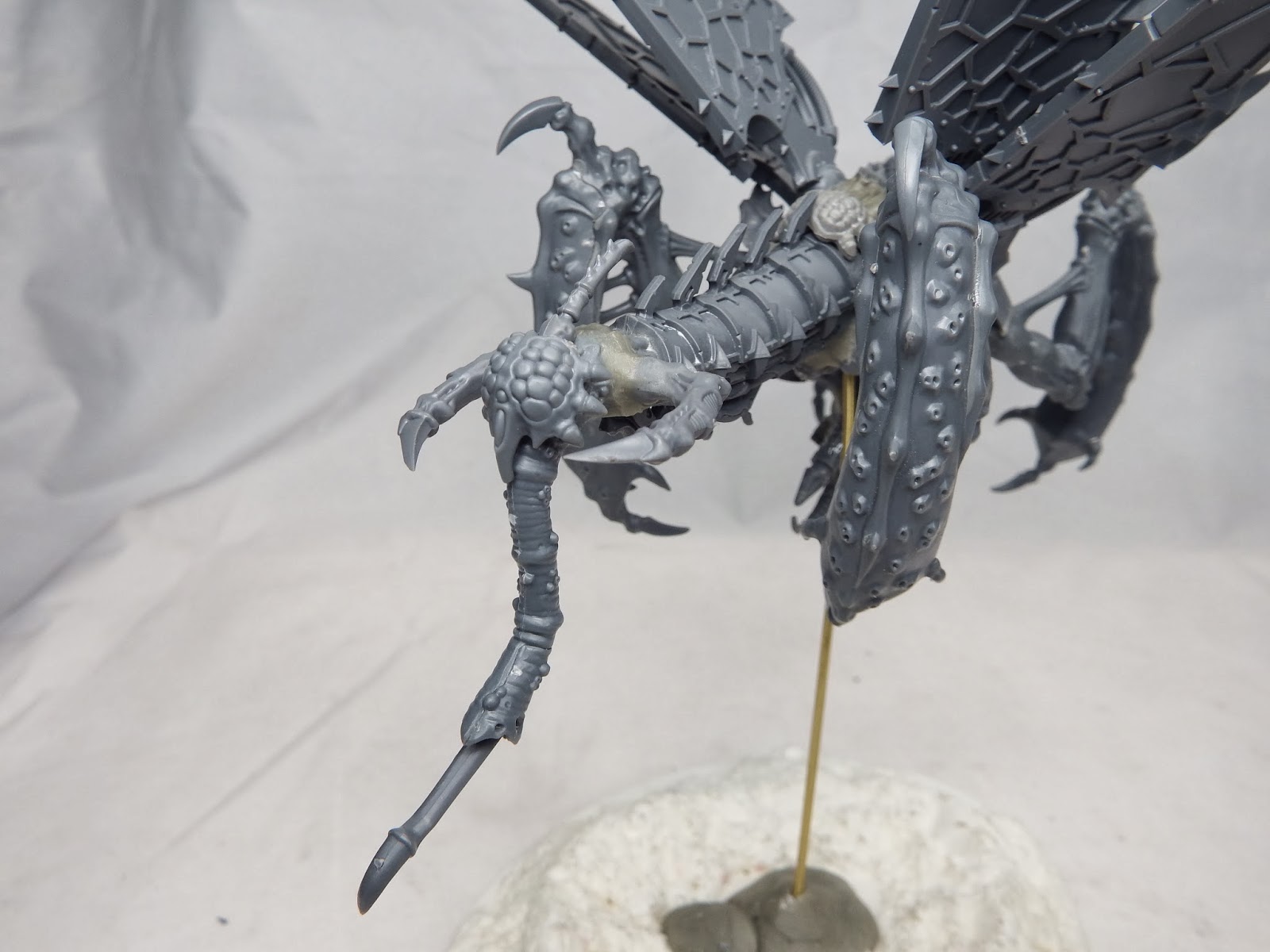 Another thing I might point out is that Fleshborer hives now have 18" range, so they have 'some' viability in a modern list.  Twenty shots is nothing shabby, even if they are only strength 4.  So maybe you want to hold onto those t-fex options for your own magnetized t-fex.

To exacerbate matters, devourers for MC's are only readily available on the secondhand market (and they go for an arm and a leg there) or through the carnifex kit.  But even then you only get one set!


So what we need then is a way to build a poor man's Devourer for Monstrous Creatures and a Poor Man's Twin-Linked Devourer with Brainleech worms for Flyrants!

Fortunately the solution to both is simple:  Termagant Fleshborers and Monstrous Creature Arms.

You can get Tyranid Devourers in very large lots here!  Less than 10 bucks and you've got enough devourers to do an entire brood of carnifexes . . . .carnifii?  Whatever, you get 15 of them.

Here's how the conversion works.  Couldn't be simpler:


Firstly take a pair of monstrous creature spare arms.  Deathspitters come to mind.  You get two in every Carnifex kit, so you've likely got a set or two lying around.  If you don't, well, they are at least reasonably priced on ebay.


Clip or Cut off the barrel of the deathspitter.  I prefer to cut, using a nice sharp exacto knife or box cutter.  Be careful, both are sharp. 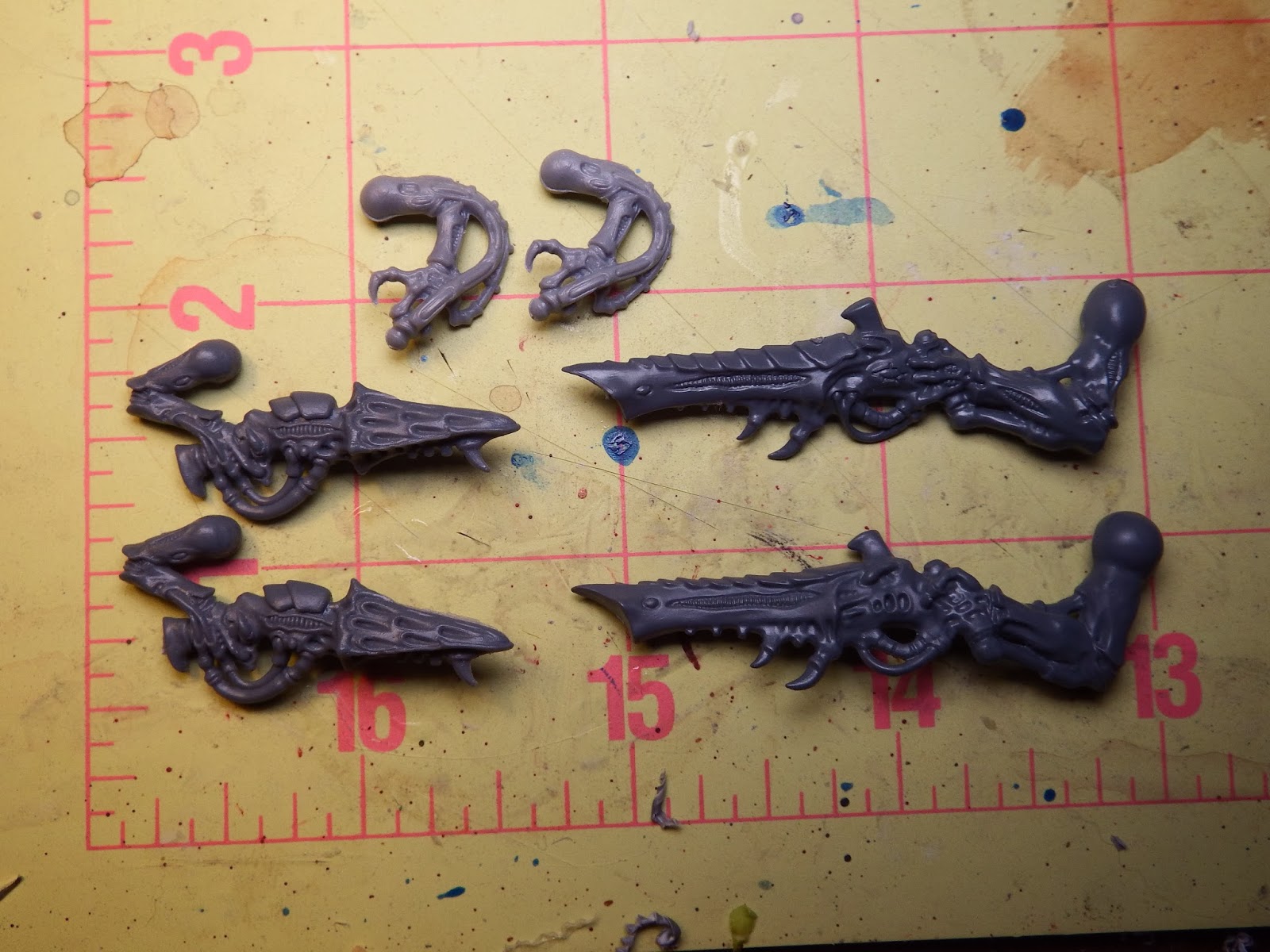 Do the same with the devourer. 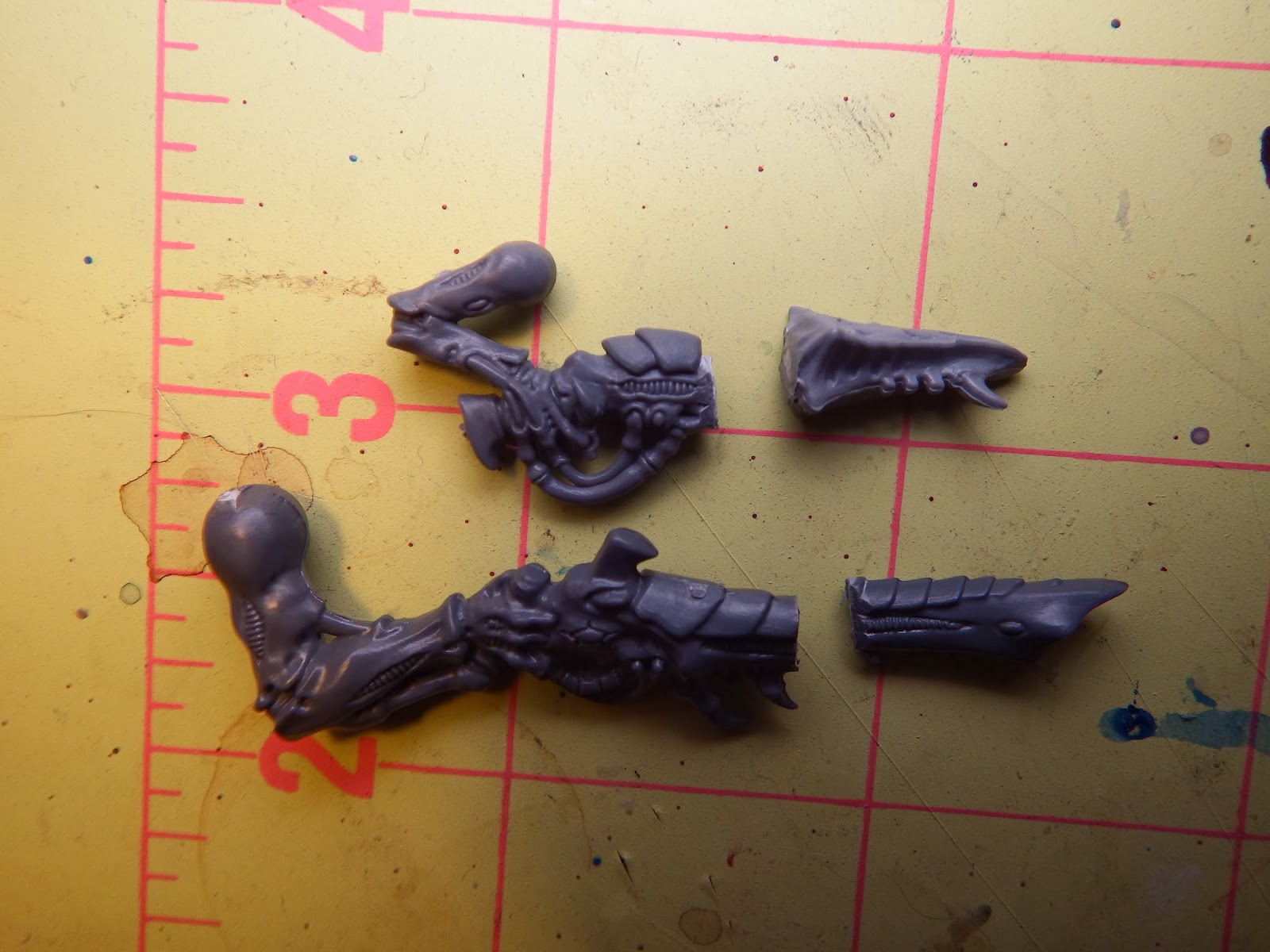 Now play musical barrels.  Presto!  And that wraps up another thrilling conversion. 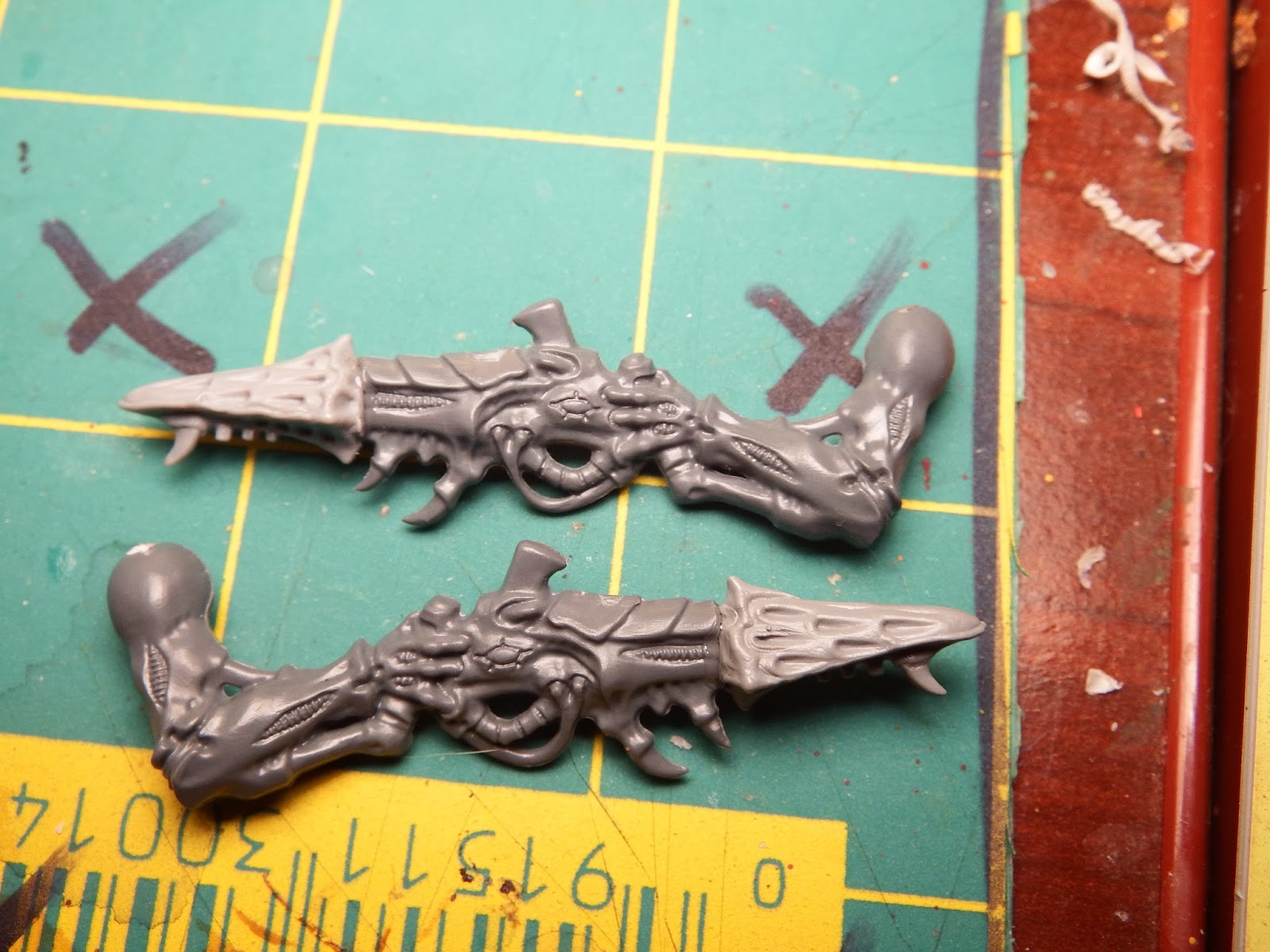 Here's a side by side shot with our custom made Deathspitter (above) and the original Carnifex Devourer (below).  Ours is a bit beefier, as you can see. 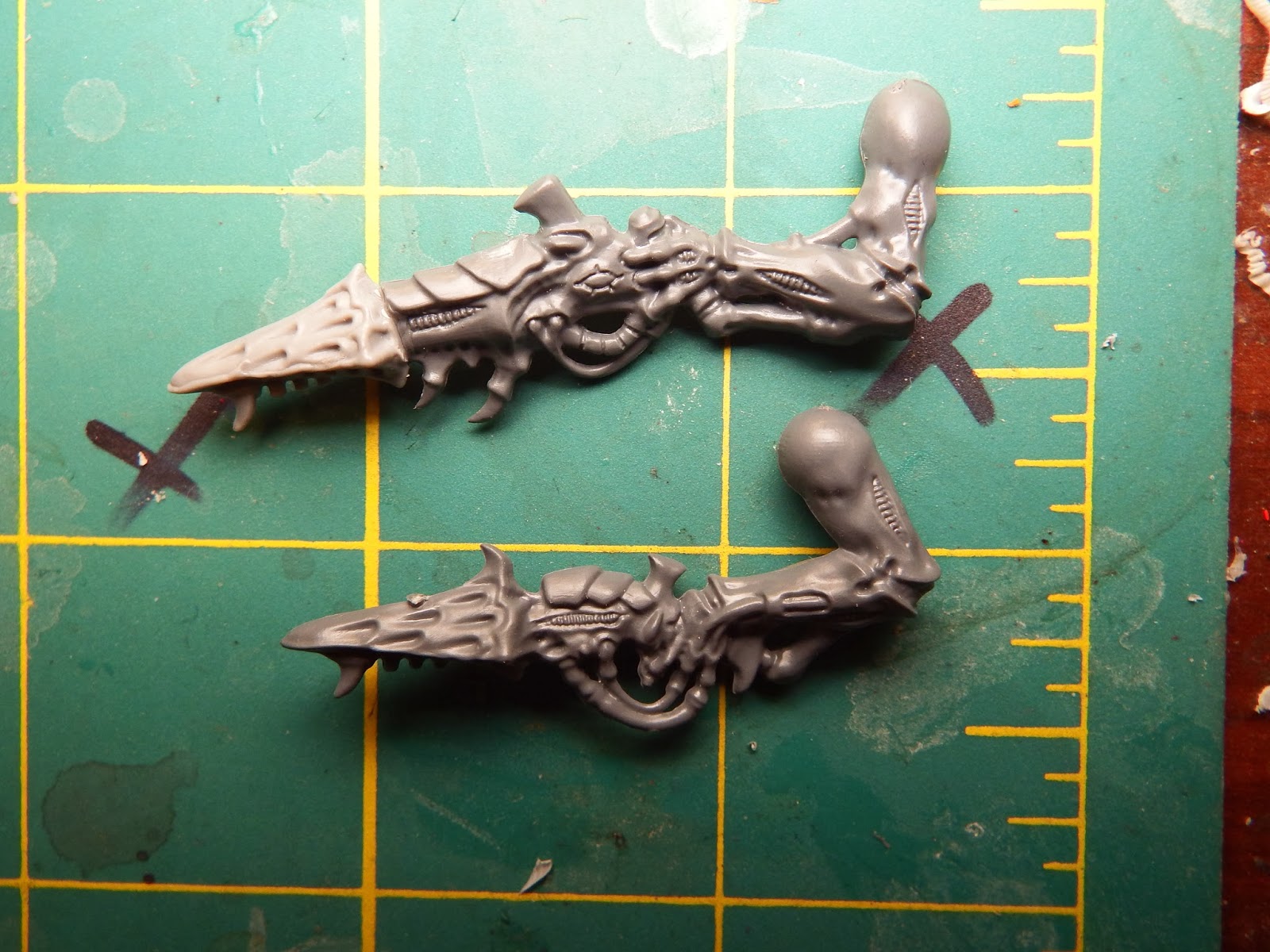 Take two MORE spare devourer arms, and a spare Tyranid Heavy Weapon.  I like the venom cannon for this, because I have a bajillion of them, but use whatever you like. 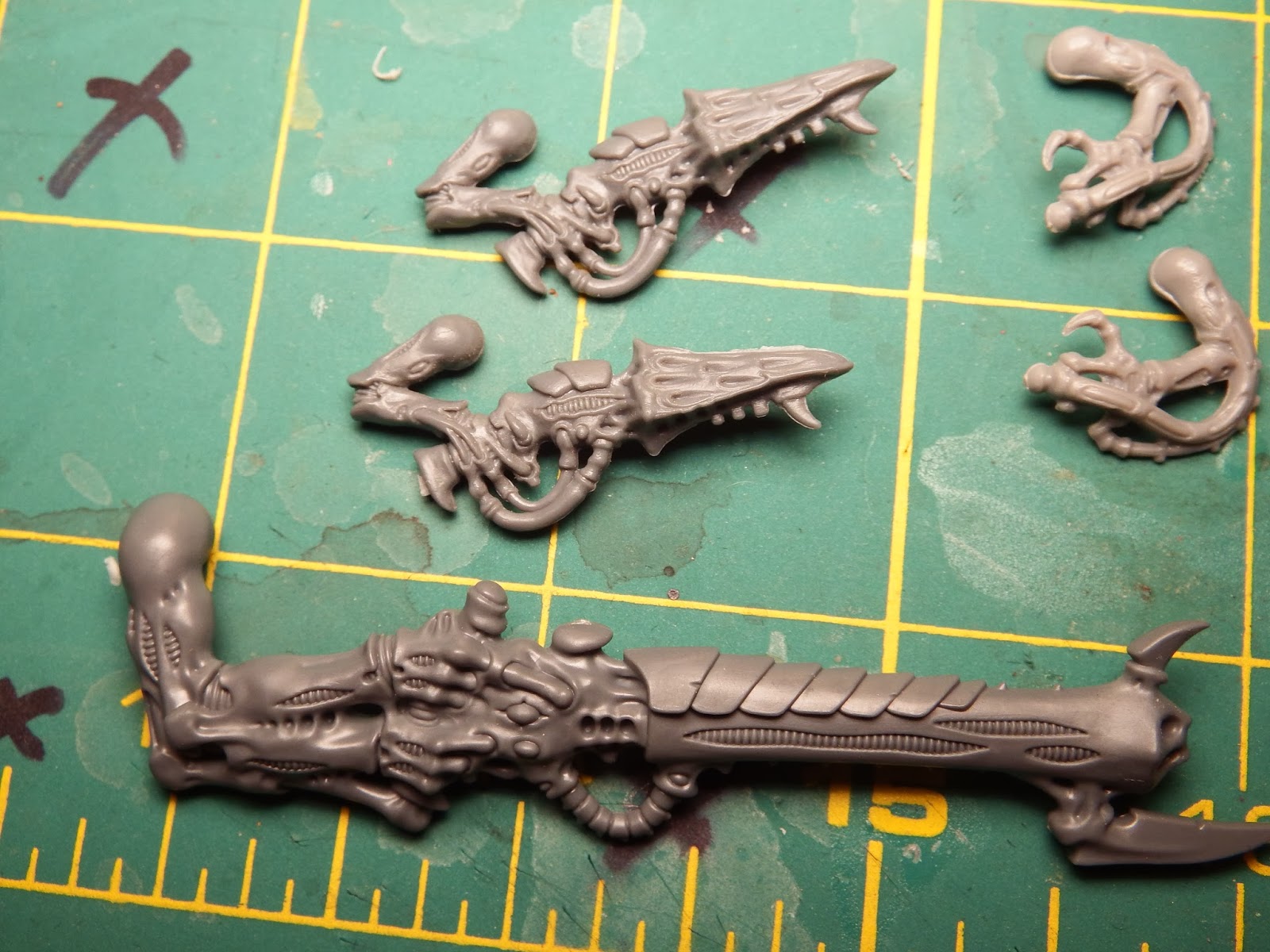 Cut the barrel off the VC.  Try to leave the little hose on the gun, if you can, since that'll look nice on the final model. 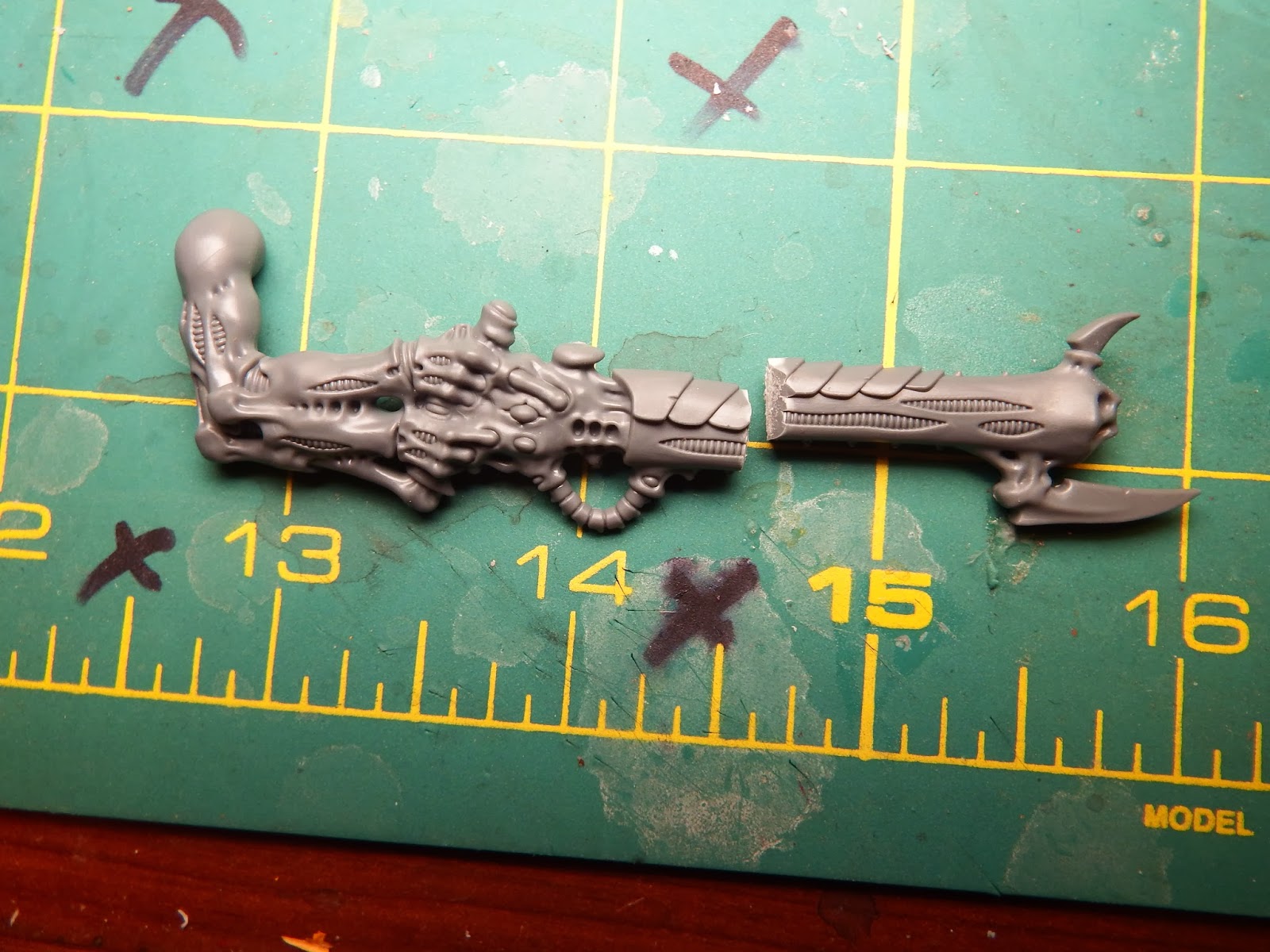 Clip off a few Devouer Tips.  Just the tip. Also trim off the spikes on the bottom. 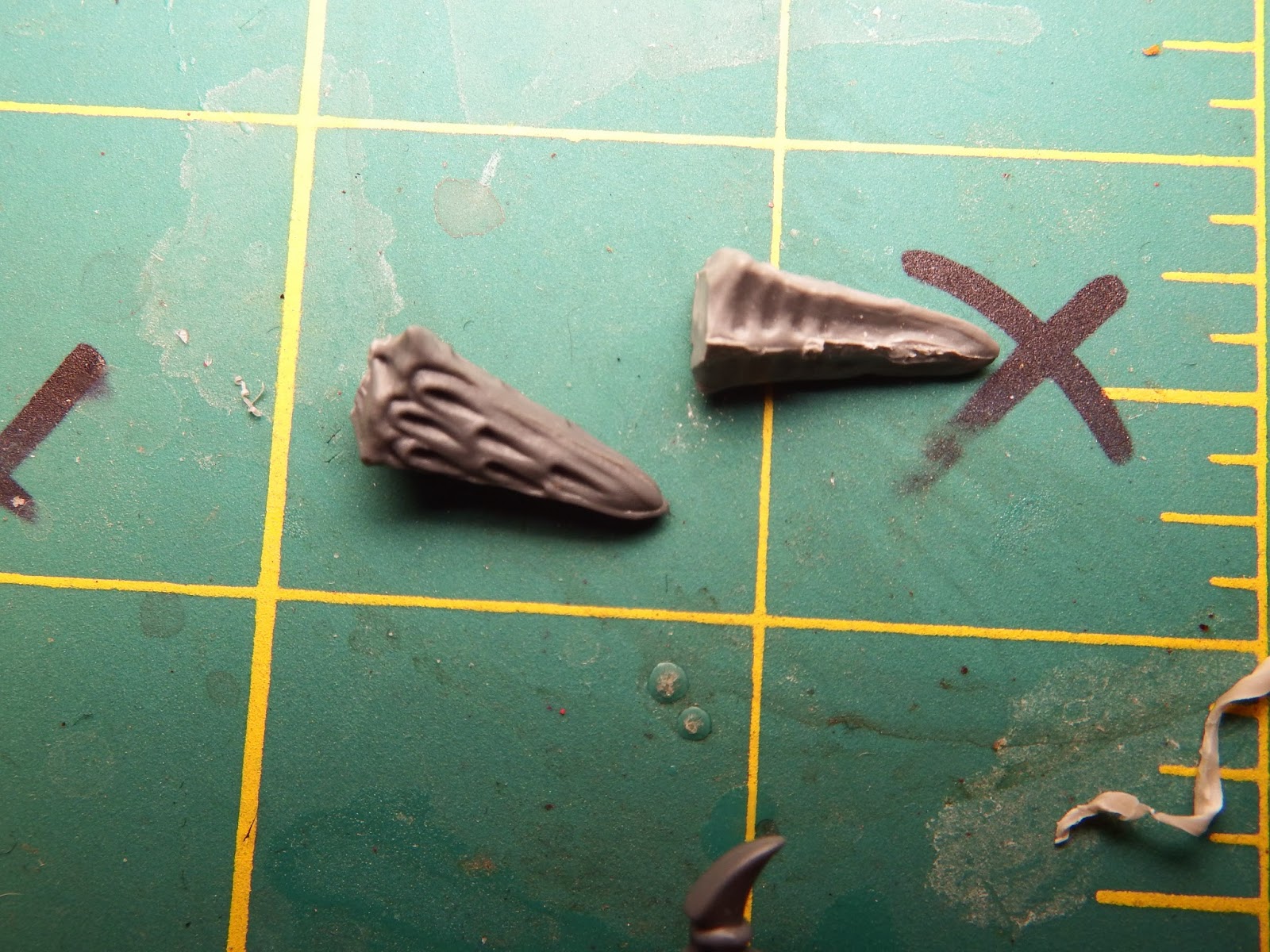 Glue on at the top half of the exposed Venom Cannon Barrel, and one on the bottom half.  Be sure to leave a small gap between them for the tendons. 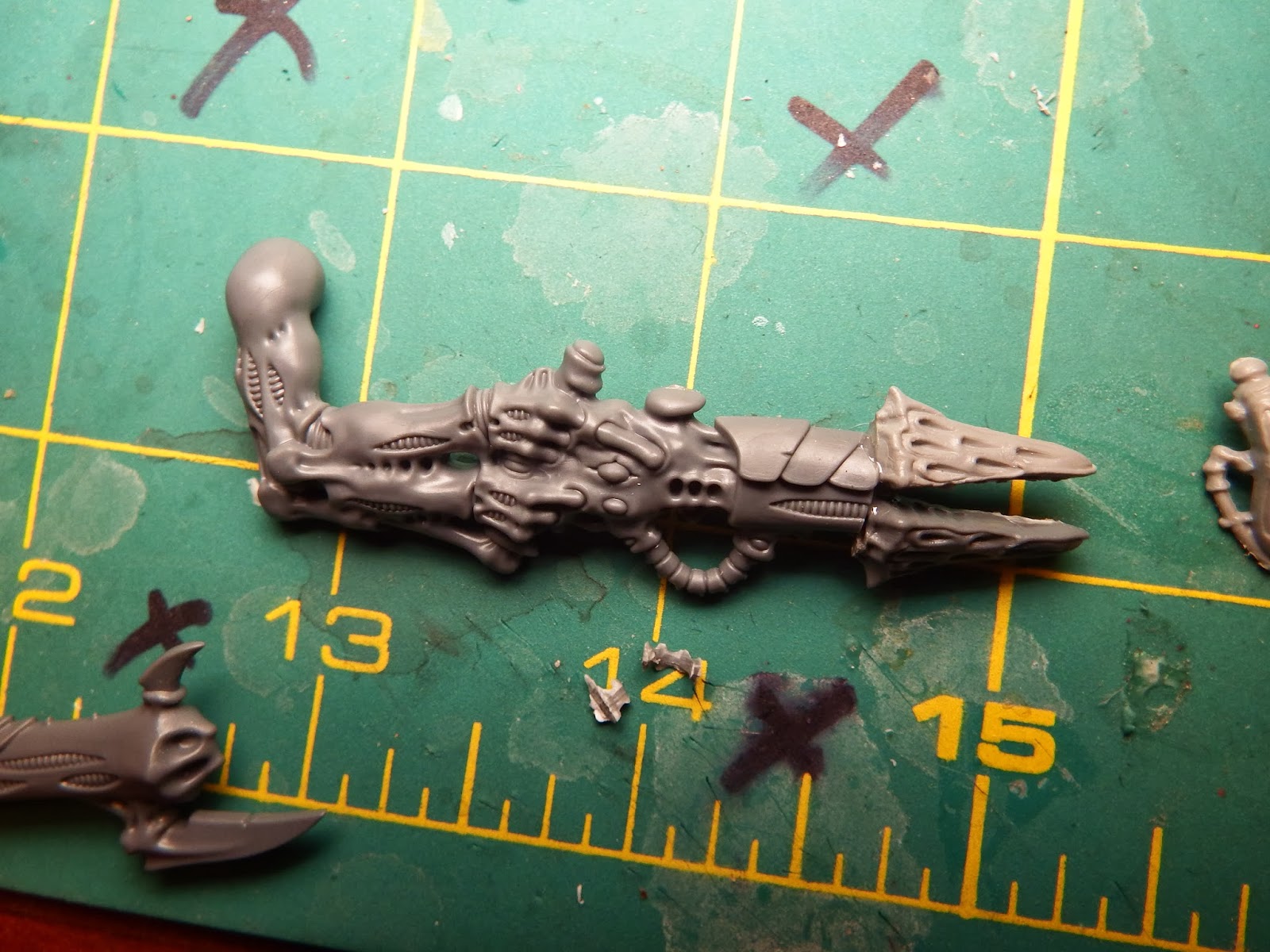 Okay, now on the reverse of the gun, you are going to have an old slot for the previous feeder tube.  You can either keep this as a feeder tube (if you want to keep this as a TL Devourer with Brainleech worms for say a Carnifex)  . . . 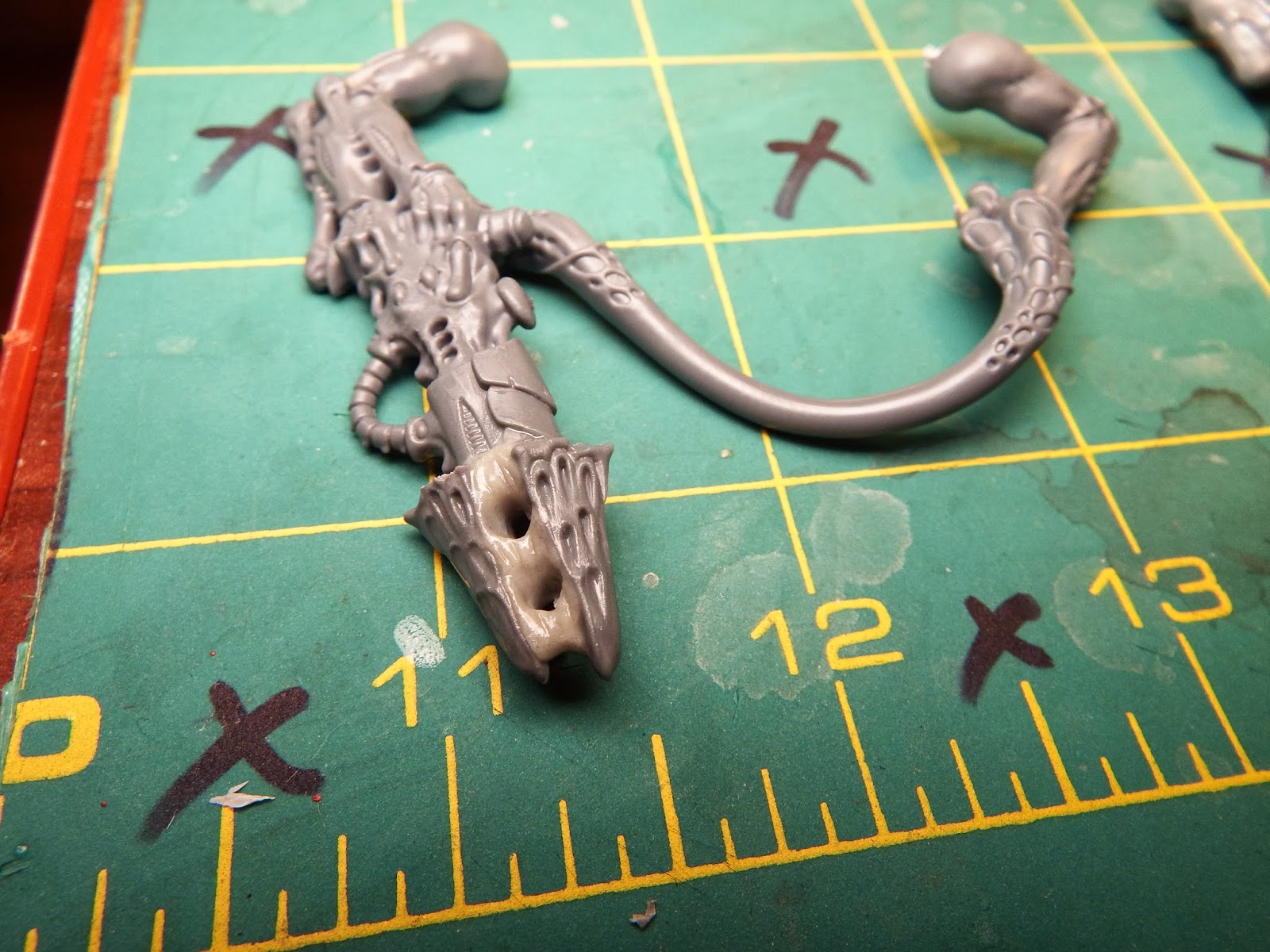 . . . .or use those spare Devouer tube arms you have from the Termagant kit to plug the gap.  I add mine on like below.  Be sure to trim off the ball joint from the small end of the hose, otherwise it won't sit flush against the weapon barrel. 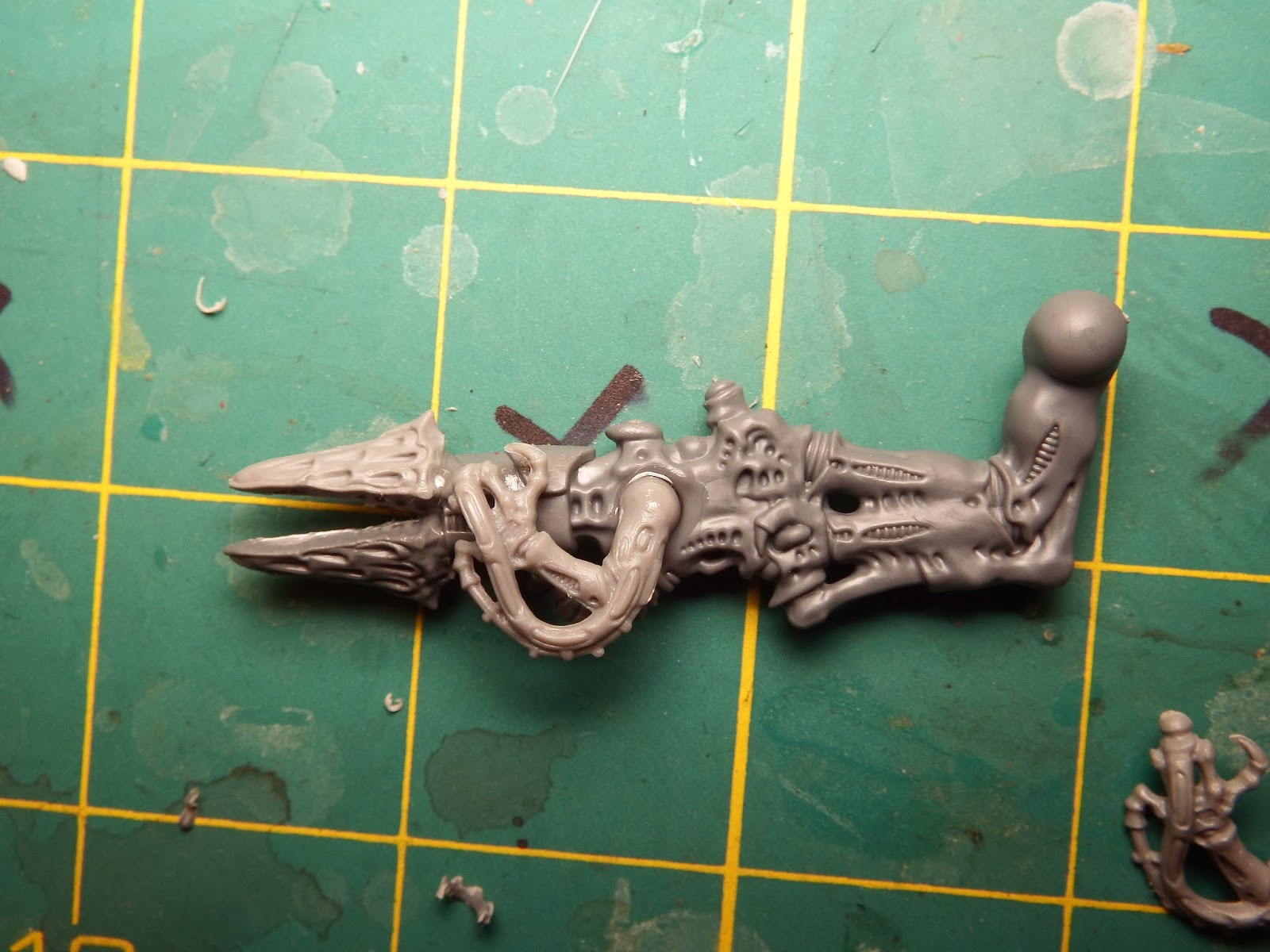 Okay, now to fill the gap.  Roll out a thin beam of your favorite, two part Epoxy putty. 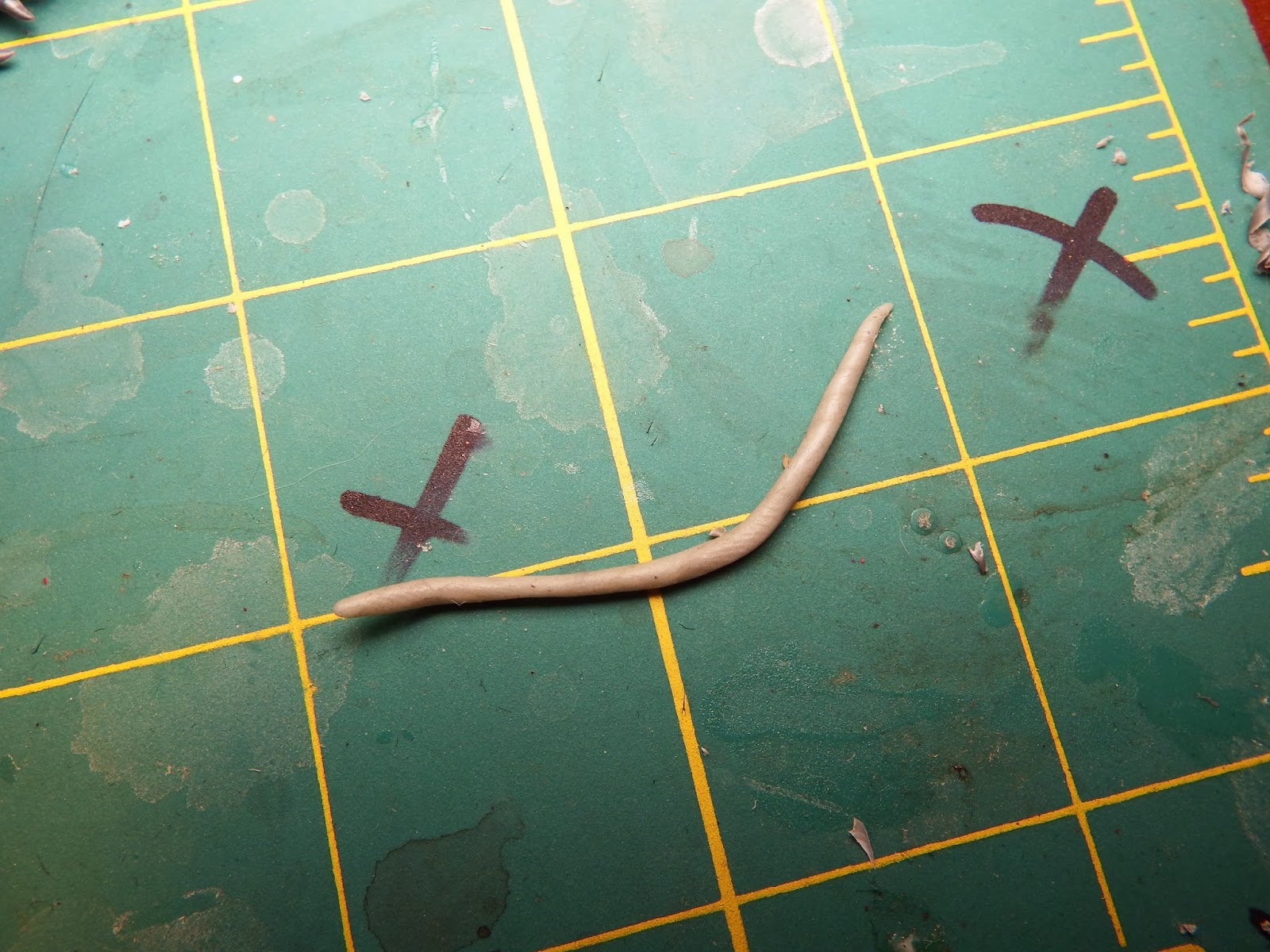 Okay, when thin enough, plug the gap with just a little sliver of the putty. 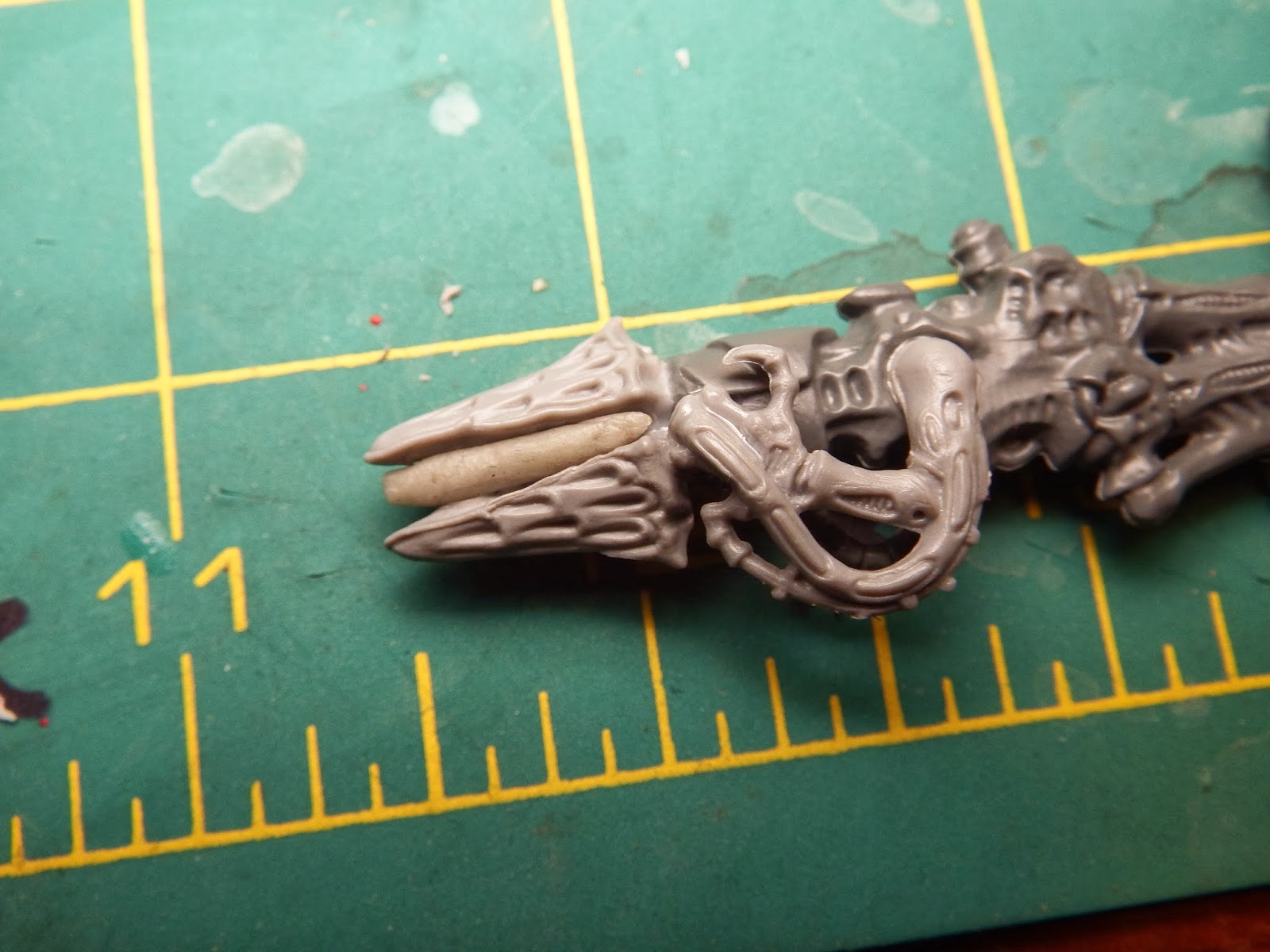 Using a sculpting tool, smooth out the profile 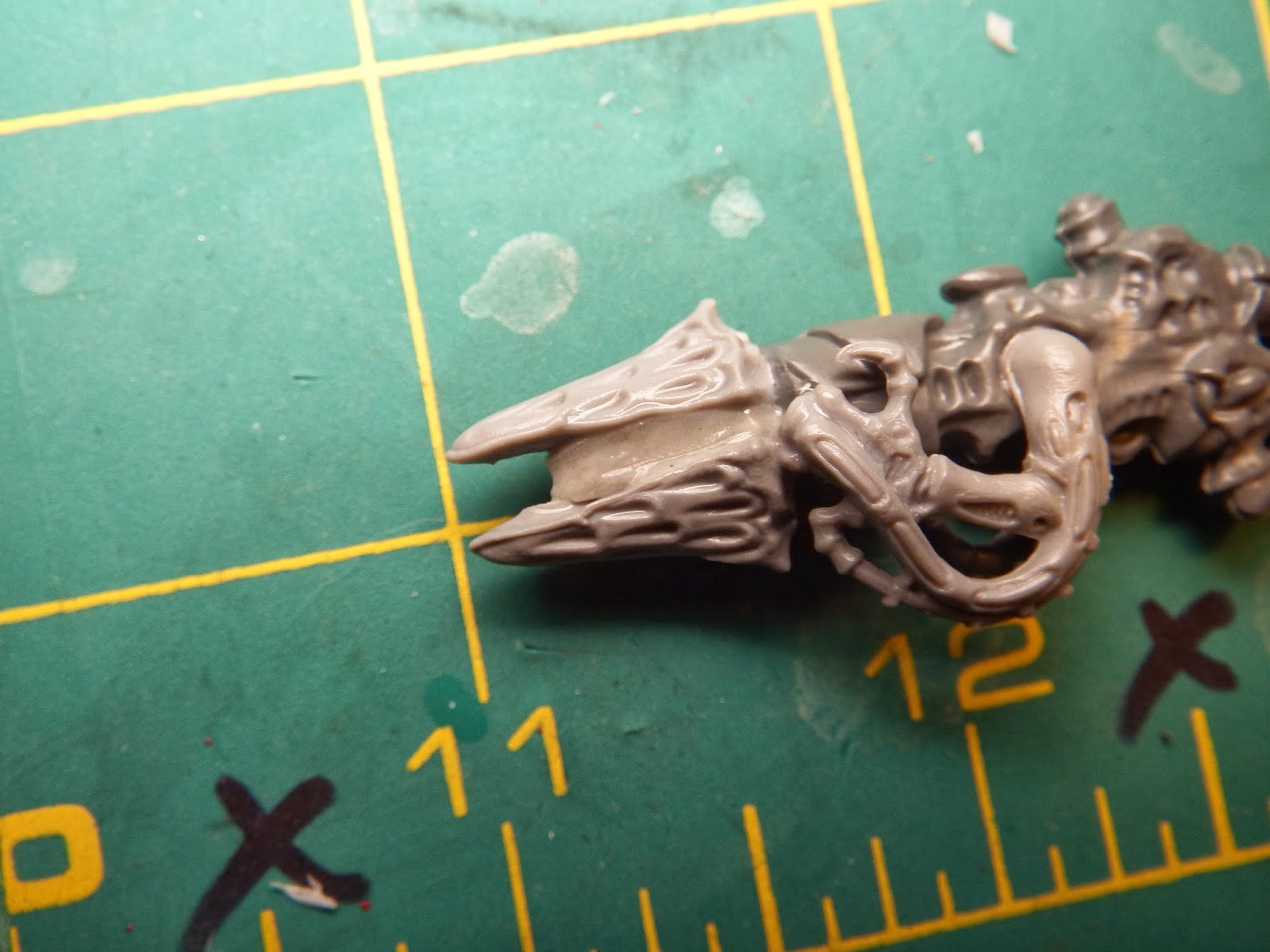 Once reasonably smooth, use your tool, a pen, or a toothpick (or whatever you have that is thin and pointy) to poke a few small holes in the putty.  If you are really cool, then poke a matching hole on the opposite side.  This will give you that 'tendony' look, since it'll actually be going through the entire length of grey stuff.

Using the tip of the tool, scratch out a few texture marks on the putty, just to give it a little definition. 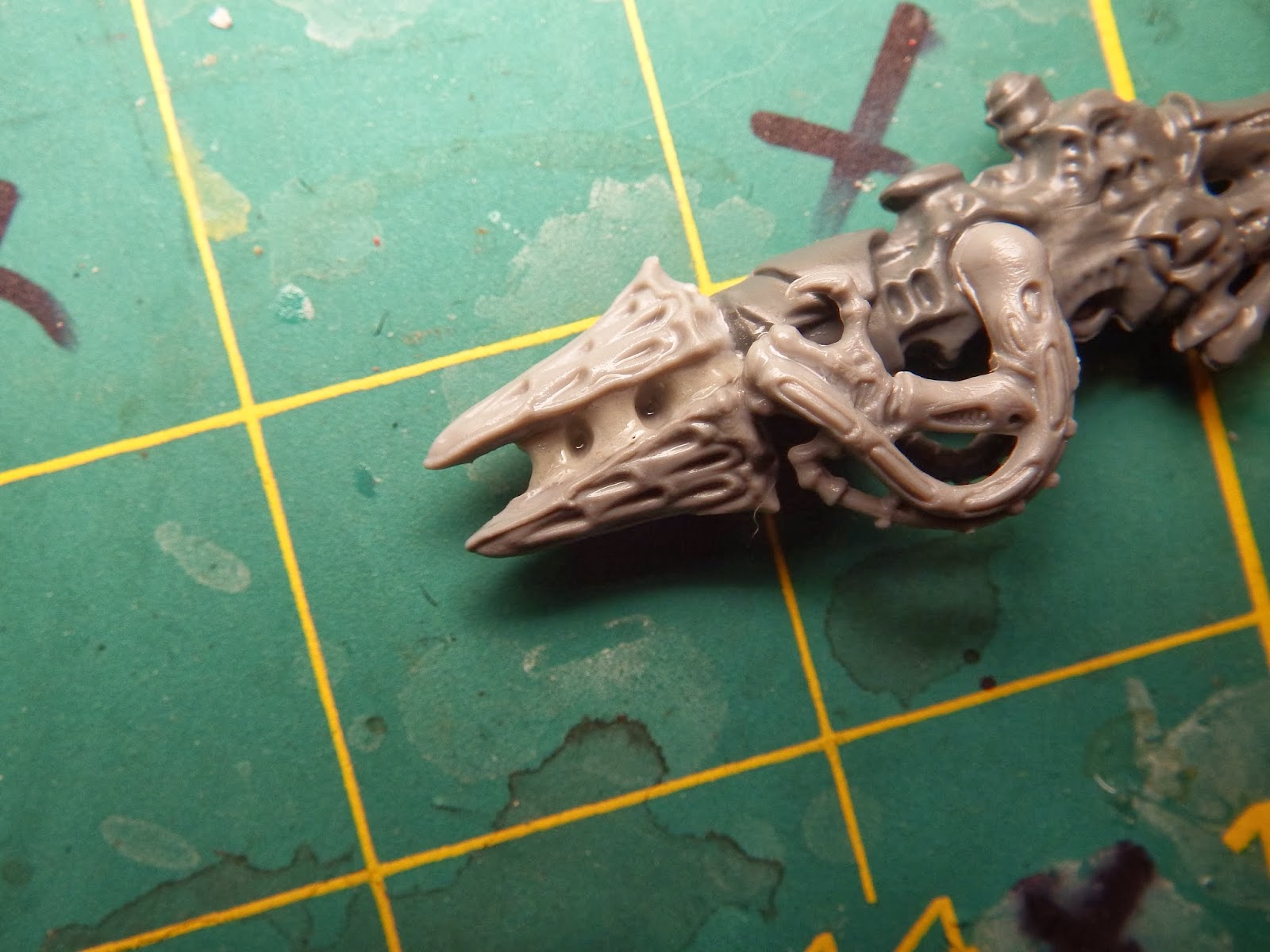 And there we are.  I made a matching set of two for a Flyrant. 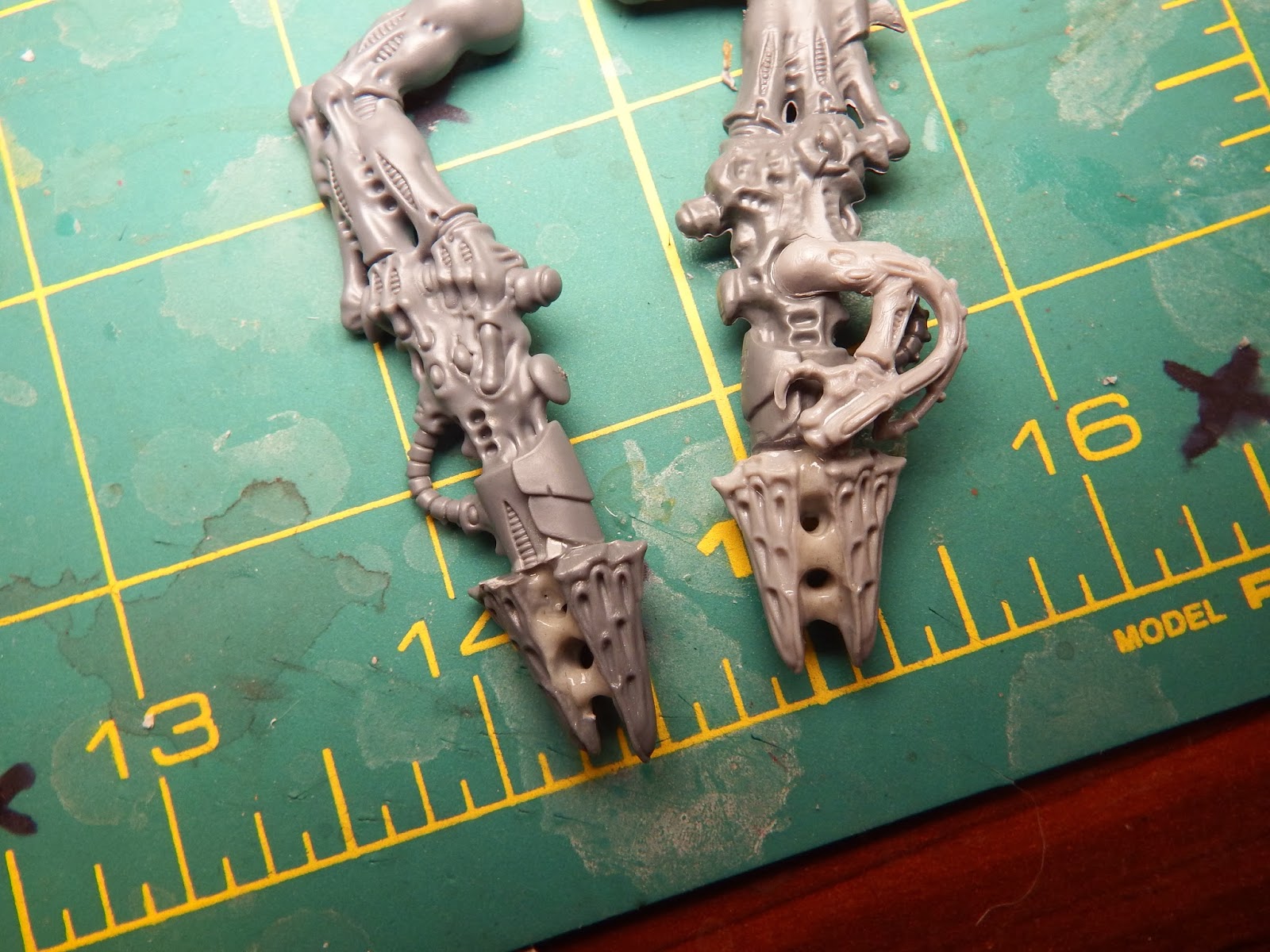 Since Heavy Venom Cannons only come in right arm selections, I had to clip the socket for the arm and flip it around to make a lefty.  Then I used a little putty to cover the gap.  Sure, you can still see the inside of his hand on the barrel, so it's sort of Rakshasa like in that regard, but meh, for me, that little detail doesn't bother me.  Clearly by now you realize I am NOT a perfectionist.  I am a generalist. 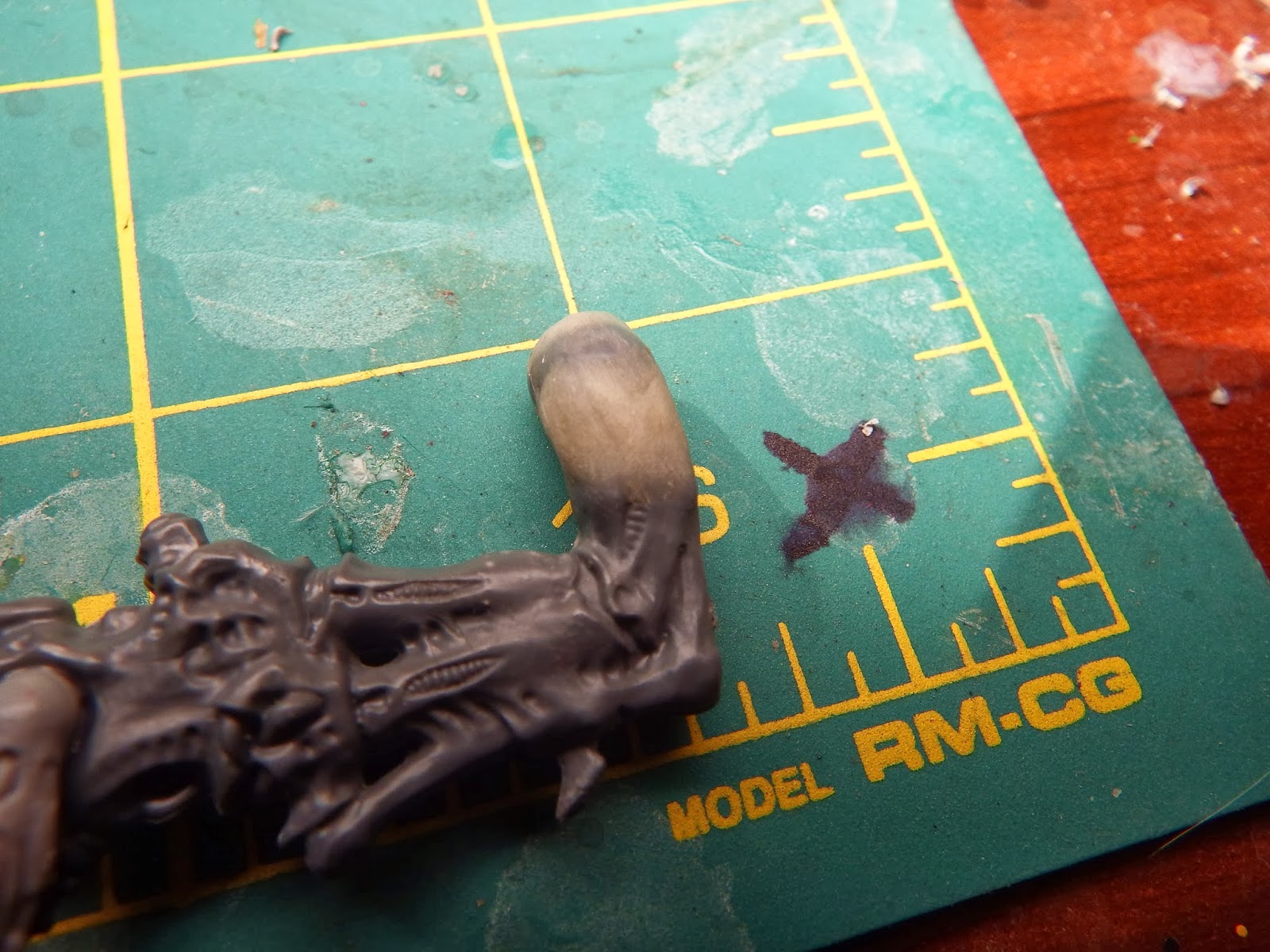 Here's the top profile on the 'lefty' gun to give you and idea of what I was talking about. 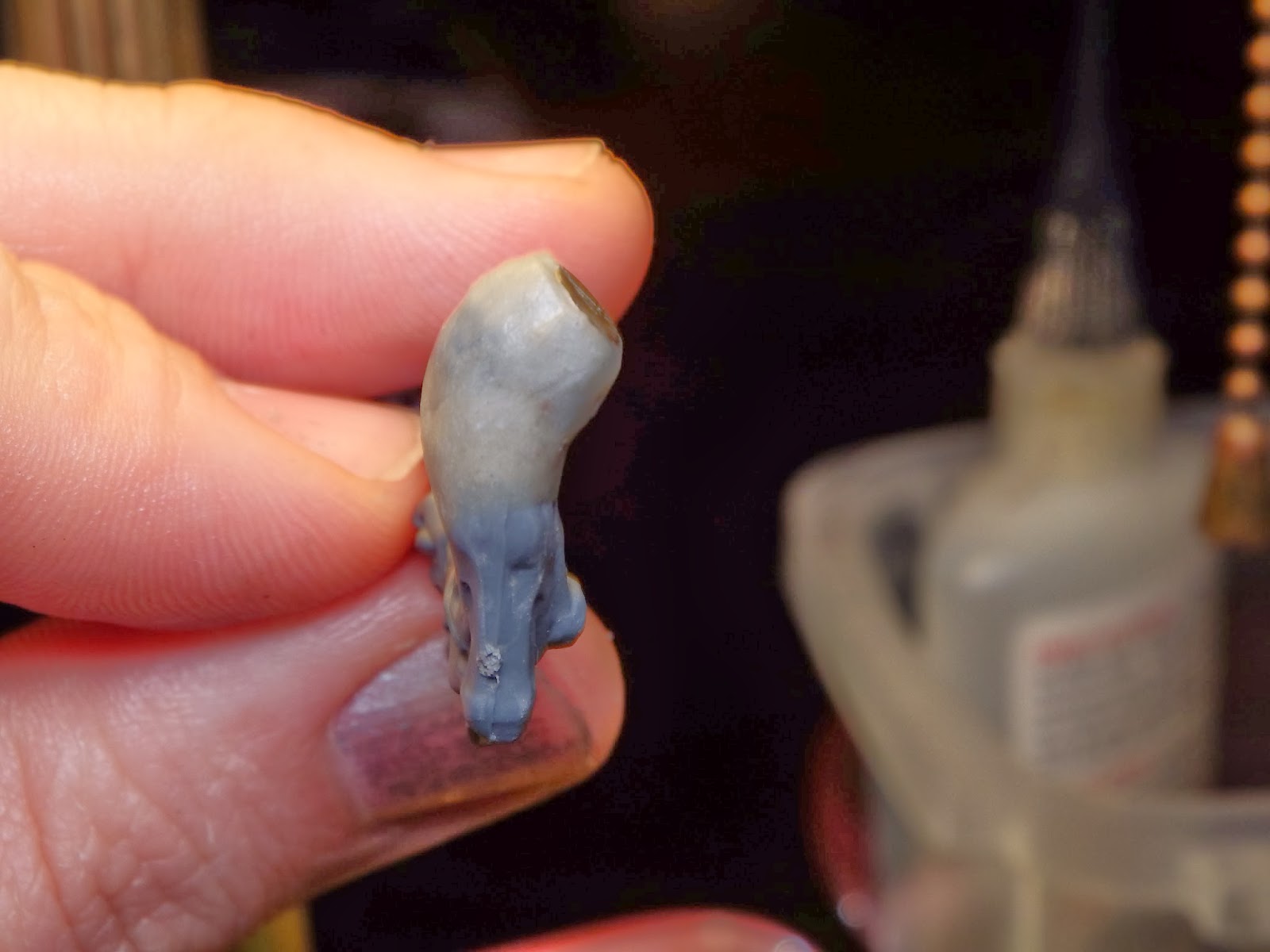 And the finished model.  Bear in mind, if you don't LOVE these devourers, and why would you, you trolls you . . just magnetize them until your broke assess can afford the real things. 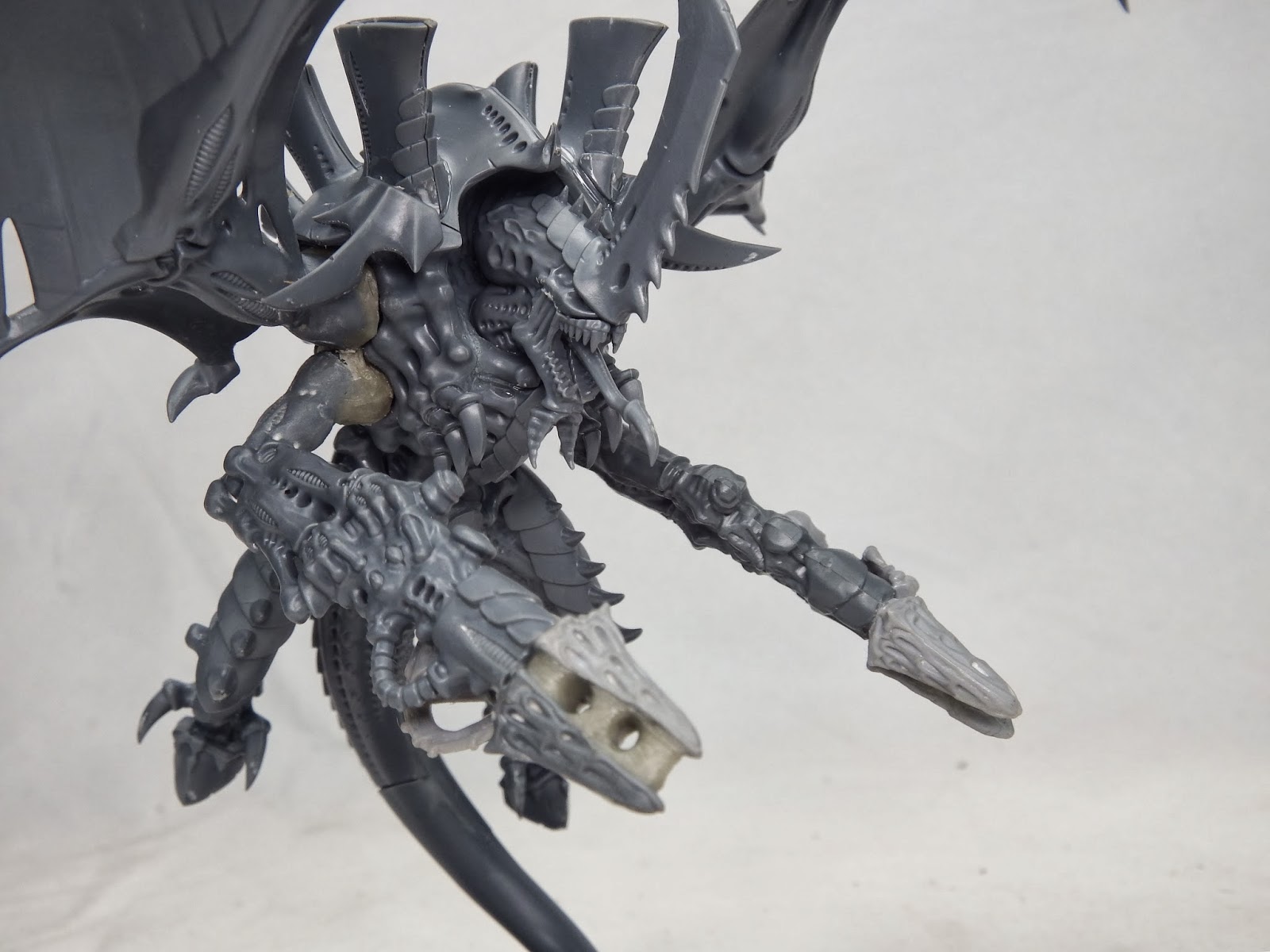 Til next time, PUT YOUR MINIS WHERE YOUR MOUTH IS!!!!

If you found this tutorial useful, be sure to check out more of our work on our homepage, or at the very least, like us on facebook!   We also have a new podcast called Warcouncil where we share other cool hobby tips!  And you can see more tips through our Youtube channel!